Skip to content
I was a libertarian globalist all my life. Like most highly trained, highly paid professionals, I believed that “my kind” is more qualified to make decisions for the World than “the plebs” and maybe some income census would be good. I supported Trump before the election, but only for an anti-war reason. I was sure that Hillary would be better for the economy.

“My people” agreed: college educated professionals went for Hillary 49-45, postgradual educated people went for her 58-37. If my earlier dreams of “smart people make the decisions” would be true, Hillary would be president by landslide. Which would not only mean wars, but also worse economy. Obama never had 3% GDP growth (he didn’t even have 2% in half of his years), Trump has it in his first year. The stock market is racing, reaching never seen heights: 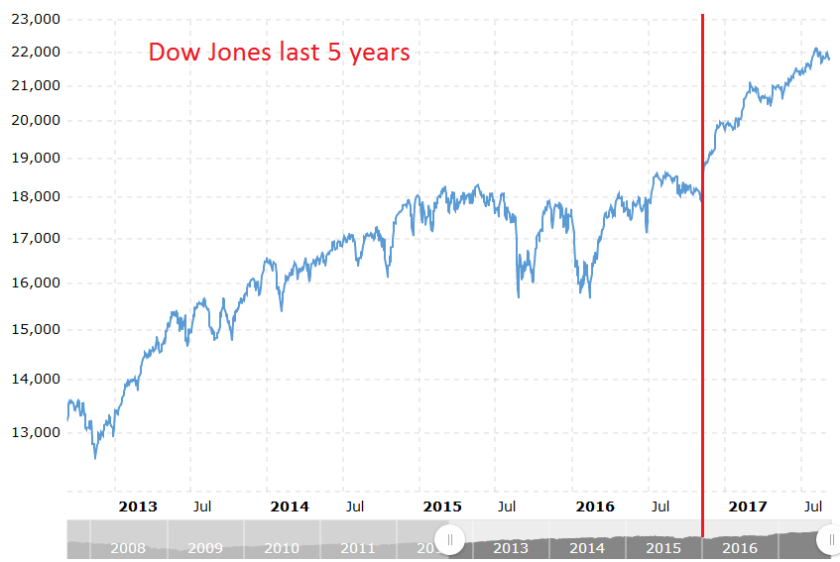 How could we “smart people” not foresee this? Well, that’s secondary to the fact that they still don’t see it. It’s not like that the election is over and people put politics behind, they “resist”. And not inner city blacks or Hispanics fill the streets and social media but educated whites. Business leaders leave the advisory groups of Trump. They call for Trump to break his main promise and keep illegals in. They donate to various anti-Trump political groups.

Wait, what if they are right? What if all these smart people see something terrible coming that common people can’t and also the business indices and GDP charts cannot?! Well, that’s the elephant in the room: they are the business indices and GDP charts! I mean the charts represent the decisions of the very same professionals. They have the money, they have the controls. Stock indices are racing because these people buy everything. GDP is growing because these people are OK-ing new plants, new hires, new investments. The situation is that the same guy who writes “Perspectives for our company and the whole economy are stellar, Build! Hire! Buy!” at business hours writes “Fascism is creeping, do something! #defenddaca #stillwithher” during launch break.

The solution to this madness is that most professionals are not rational, just capable of compartmentalizing. During business hours he focuses on business data, economic predictions, tax reforms and makes an objective analysis. But after he stands up from his machine, he switches back to social person, caring for emotions, peer acceptance and peer respect. Deporting children (average age 25) or supporting fascism (tolerating unpopular free speech) are immoral, connected to bad feelings and bring peer shaming. Supporting Hillary talking points feels better and gets more likes, so he does that. He isn’t rational to realize that if fascism is coming, he should be selling everything and move to Canada instead of investing into US companies and OKing an ambitious 5-year plan. A rational would recognize that if “diversity is our strength” then maybe he shouldn’t write “lower HR costs” to the positive column in the 5 years company future prediction.

But wait, do I claim that the rationals are the uneducated, religious, rural people who by voting for Trump caused this economic growth against the will of the business people?! Of course not. Most of them are probably even less rational than the businessmen. However they are forced to be! When the economy isn’t going well, the businessmen might make a few % less, but still over $500K. Maybe they are laid off and have to take another job for less, but still over $250K. Maybe they lose a couple million on bear markets, but still have tens of millions if not billions. For them, economy is a mere sport. They don’t do it for the living, they do it for status and thrill. For the “plebs” it’s a life and death issue. A factory closing can make them lose their job with no new job available around while their home devalues to the point where they can’t afford a new one where jobs are available. A pay cut can make them unable to afford “affordable” health care. An investment bear can eat their pensions. A pointless war can put their son in a pine box. An amnesty places a criminal alien family literally next door. They are forced to vote with their rational interests instead of their hearts. They can’t afford to “I may pay more tax but love matters more #amnesty #youbelong”.

The middle class and lower middle class people are canaries in the mine. They are first affected by the economy and have very little buffer against it. They can’t move from a negative social issue to a better neighborhood. They die to crime, they die in wars. They feel every bad policy on their own lives, so they vote against it. While individually they can be dumb, as a class, they vote for rational self interest, while the “elite” can afford to support harmful policies for emotional or social reasons. A good policy is the one supported by the “plebs”. Populism, catering to the middle class is the only way to make a society succeed.