Skip to content
I promised Random-Ranked cross references, but they can wait, because something more interesting came up. In World of Warships you get a star for winning a ranked battle and lose one for losing it. If you win/lose enough stars, you move down/up in ranks, with the best being able to reach rank 1. There are 7 players in a team and the best one (highest XP) doesn’t lose a star.

There is a widespread belief in the community that “star savers” are present in the ranked battle en masse and they are ruining the game with their “selfish” behavior. According to the myth, they purposefully perform actions that give them XP while not helping the team to win. They don’t care if they lose, because they lost no star. To prove/disprove this, I downloaded (manually) 49 pages of Ninth Season statistics, containing all Rank 1-5 players on the EU server. They are in the final bracket of the ranked battles.

Then I’ve sorted them by winrate. Out of the 4882 players recorded, only 327 have less than 49% ranked winrate (this includes the battles that got them down from unranked to rank 5). 230 have 49-50%. Everyone else have better winrate. So even if the star savers exist, they are a tiny minority. But to see how they behave, I’ve separated the players into 10 groups, with the first group containing the lowest winrate 1/10 of the players, while the last is the highest winrate 1/10. Then I plotted all their statistics. To fit everything into one graph, I divided the data by its average. So if a group damaged 1.5x more than the total sample average, they got the score of 1.5. 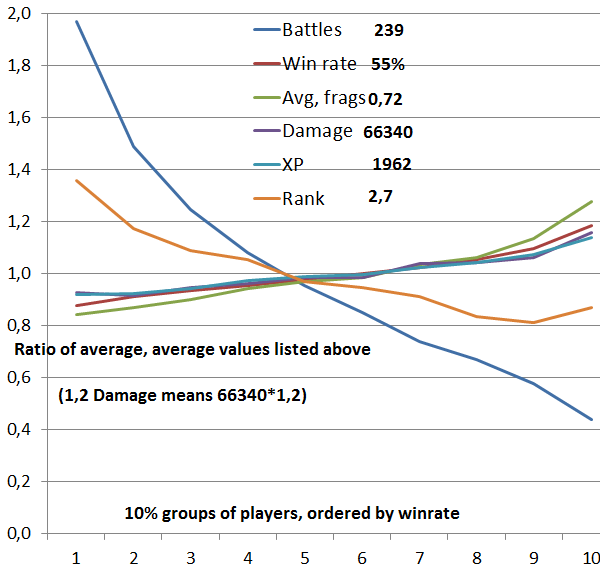 What matters here is how closely the performance stats (damage, XP, kills) stick to each other and winrate. The first group (which contains the mythical star savers) doesn’t have high XP or damage (that is farmed on battleships according to the myth), they are just as low as it’s predicted from their low winrate.

But more importantly, whatever they do is not working. They have the worst rank of all groups 1.35*2.7 = 3.7, while the data only contain 1-5 ranked people. So they are lingering on the edge of the bracket, they are not sneaking into the top by any means. If they shoot HE on Yamatos ignoring nearby destroyers, that’s not a sinister plan to cheat their teammates, but simply being bad. Please note that “bad” is a relative term. There are 141419 records for random battles in EU, so the whole 4.8K 1-5 ranked players are top 3%. These low winrate players are good, just not good enough to get into the top 1% who actually rank out.

I assume the myth was created by them. They can’t progress despite their 400+ ranked games and start blaming their teammates. They imagine some evil conspiracy of selfish players who deny them victory to save stars, when the problem is that they are just not good enough – just like their peers who receive the blame.

5 thoughts on “World of Warships: the myth of the star savers”